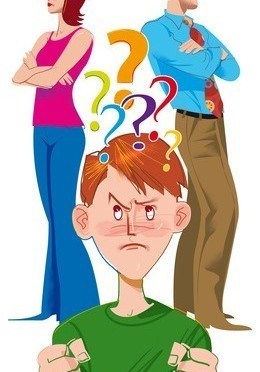 Parents that are going through a divorce are justifiably filled with a lot of emotions. Not only do they have everything on their plate that they previously had, but now they have to deal with a divorce. Childrens’ feelings can easily take a lower priority than your own. All parents going through divorce should take 10 minutes and listen to this story on NPR’s This American Life from eight year old Betsy Walter.

Act Two. But Why?

Eight-year-old Betsy Walter goes on a campaign to understand her parents’ divorce. A campaign that takes her to school guidance counselors, children’s book authors, and the mayor of New York City. (10 minutes)
The interview with Betsy first aired on NPR’s All Things Considered—in 1987, when a young Ira Glass was a producer there.

I take out of this that kids want to know more information about what happened. This does not mean that the parents have to share the most personal details of why they got divorced, but they should reassure their kids that it is not their fault and focus on moving forward. If you have children and are going through a divorce, make sure your children know that although you no longer love your spouse, you will both always love your children. And if your children are having a hard time adjusting to your new life, consider a therapist. That is what I got from Betsy, sounds like she needs someone to talk to other than her parents.

What part of Betsy Walter’s story was most effective in understanding the feelings of kids?