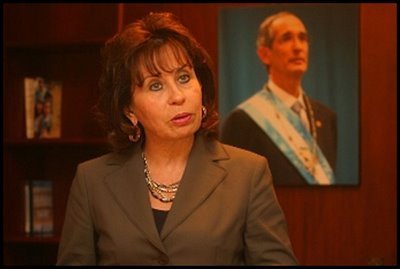 The political party intends to get around the constitutional prohibition by having President Colom’s current Wife, Sandra Torres run for President. In order for her to officially be allowed to run for President, Mr. Colom and Ms. Torres must be divorced. Once they are divorced, Ms. Torres will no longer be barred from running for President. Several opposition parties are challenging the Guatemalan President’s Strategic Divorce in court, but Guatemalan law allows divorce by mutual consent.

Ms. Torres had this to say about her divorce:

Ms. Torres reminds me of current Argentinean President Cristina Fernández de Kirchner. In 2007, President Kirchner succeeded her husband, former President Nestor Kirchner. Apparently Argentina does not have the same presidential succession laws as Guatemala. It does not look like Ms. Torres currently has the popularity that Ms. Kirchner had. Foxnews.com reports that a recent poll has Ms. Torres with 13.7 percent of the vote compared to the leading candidates 47.2 percent of the vote.